This ‘East of Peace’ was Published in 2018 Paperback book COMPENDIUM II printed in colour on quality paper, by Blue Light Publications. It is also available in Electronic Kindle book. amazon.com 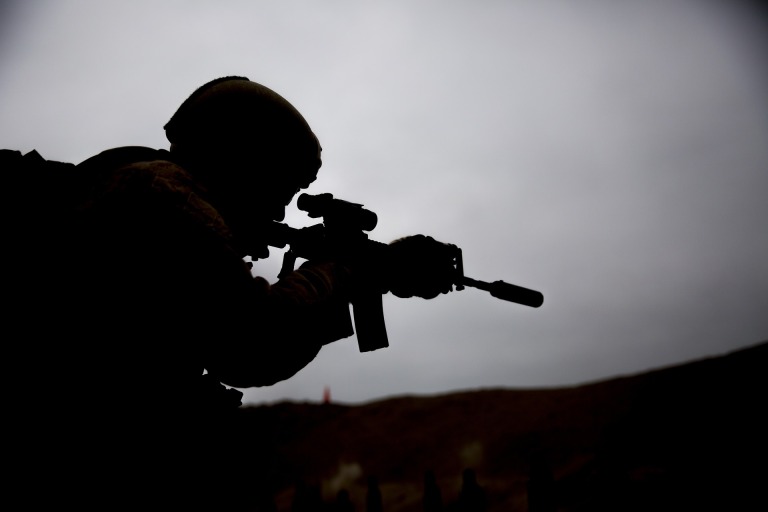 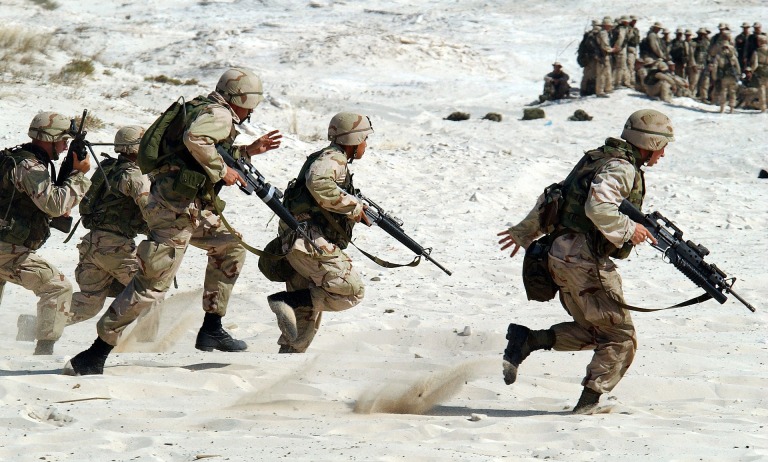 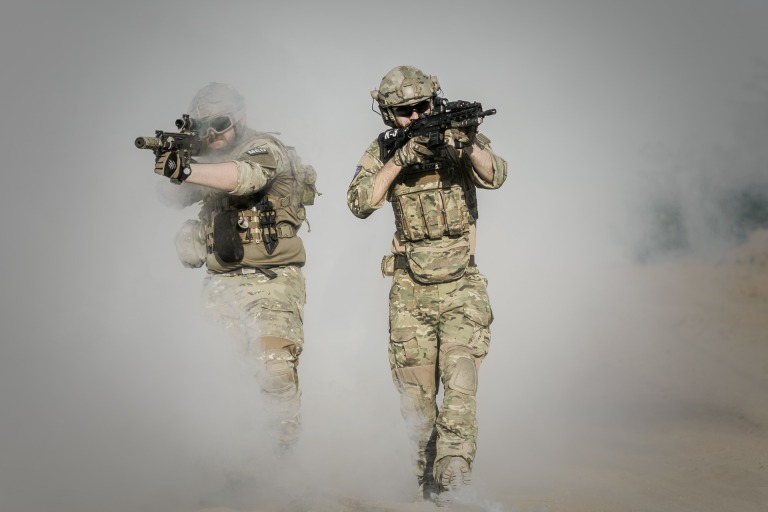 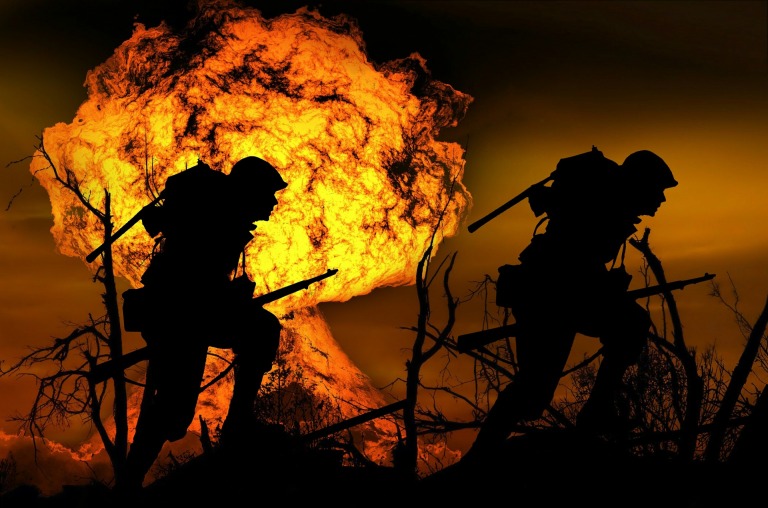 A ‘Messenger of Love’ wearing a red cloak, stood at the edge of a battlefield. Tears trickled down his face when he saw the carnage of death. Bloodstained and mangled corpses lay scattered in the valley of rocks, which lies ‘East of Peace’.

“Water… water”, a voice called out.

The spirit of love walked upon the sand, towards the sound of need. Beneath a hot midday sun, the messenger knelt down beside the dying man, and picked up a canteen, which laid near his feet. The soldier sipped slowly, precious drops of water, whilst the messenger held the vessel of revivification to his lips. A few seconds of silence passed, the soldier stopped drinking and pushed the canteen with his left hand away from his face. He paused for a moment and looked tiredly into the eyes of the Samaritan. In a soft hoarse tone, this man of resolution struggled to speak, “No-one taken prisoner, we fought to the end and took many with us. They just kept coming, there was too many of them, we…” The soldier slumped in the messenger’s arms and knocked the canteen out of his hand. The water vessel slid down the hillside, slowly spilling its life-giving properties until it came to its resting-place against a crevice of protruding rock.

The messenger, a man of compassion… picked up the body of courage in his arms and carried the soldier to a nearby small tree, which stood alone on the barren land. He gently laid the deceased man down on the ground, in the shade of serenity. Kneeling over the soldier of peace, the Messenger spoke softly, “Thou has died this day a man of love. Evil persons die many times; caring people die only once. Thou have lived and died by thy own choice. Thou chose to be first a caring man. Defending your convictions, thou died fighting for the preservation of freedom. Truly thou have died with honour.”

Standing up the messenger raised both arms to full length with his palms facing the heavens… he shouted with voluminous thunder, “Lord take this spirit and the spirits of all just men into thy arms of eternity. Any person who fights to preserve peace and freedom, shall be called defenders of justice. Such persons of honour shall find eternal peace.”

Lowering his hands down to his side, the messenger turned to look at the battlefield of tragedy and continued to speak in a softer voice to the winds of life and death, “Mankind must learn by the deeds of honest people. Just as valiant defenders of the past have died for their convictions, so too, must every man and woman protect truth and defend justice. Let no man surrender to evil. Fight to the death for the right to ‘Democratic Freedom’. There is great honour when a person dies for another individual’s right to live free in peace.”

“Condemn tyrants for their evil by refusing to surrender to them. Do not resist evil by the use of violence, when you can walk the way of peace, but never surrender to evil, when the only way to live in peace is by self-defence.”

“Choose death rather than subjugation. Is it not better to die free than to live in tyranny?”

The messenger proceeded to walk through the bloody battlefield, as he examined the devastation, he thought unto himself, “War is senseless, the stupidity of man creates wasteful death. Is not the way of peace more fruitful? Why man why? Why not love and the way of peace?”

The messenger stopped walking and gazed upon the field of courage… he raised his voice and cried out to the valiant dead, “You have won this day a great victory. By your sacrifice, you have been true to yourself and to the world.”

Lowering his tone, he continued, “Your death is but a transient experience. You have given your spirits unto God. As it was in the beginning, so it shall be in the end.”

The messenger vanished from the field of waste. As the sun set on the bodies of degeneration, darkness cast its shadow over the valley. A gentle breeze stirred and grew stronger in its momentum, chanting across the open spaces, it touched the souls of the dead. Enhanced by a dim moonlight, spirits of courage rose into the stream of life, and were received beyond the star of guidance.

Wind whistled in the valley as daylight dawned, but all else was quiet. The valiant bodies had vanished and only the evil dead lay there as testimony, that evil is not wanted, and dies again and again, never finding peace, only eternal darkness.

The ‘Messenger of Love’ exists within each one of us. The messenger is our spiritual feelings, our cosmic guide.

This American Monument is Respect

For Every Soldier in every Nation that Fought For their ‘Right to Live Free’.

Every Nation must have the Courage to Fight for Freedom.

This valiant commitment statement by American Soldiers, is the same commitment, all soldiers of Free Nations make, in conflict.

Written with great respect for all Soldiers, Navy and Air Force military personnel that fight to protect and preserve the eternal human right to live free, from tyranny. 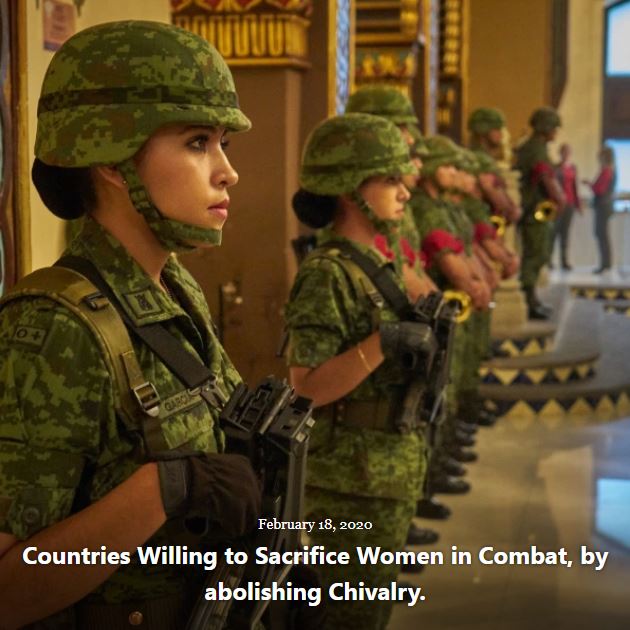 ‘The Last Epitaph‘ was written by Allan Ivarsson in early November 1975 in Lewisham Hospital Sydney, after he was given three hours to live by doctors at 3 am in the morning. His parents were told to come quickly to the hospital because they said, Allan would not survive the night.

Allan 26 years old, nearing 27 years said, when he overheard the Doctors message… “Like Hell! Nurse please give me a pen and paper.” The nurse asked, “Why?”. Allan replied, “Because I am going to write!”

Allan wrote for 12 hours straight, refusing to go to sleep, even though he was very tired; he had blood clots on both lungs. He was in pain, every time he breathed. Backed by ‘Positive Mental Attitude’ since 1969, he prayed to God and said, “If you get me through this, I will do what you asked me to do in March 1961, when I was 12 years of age.”

Allan survived, at this point of time, Allan was not a writer. He threw all of his notes into the garbage bin and kept only one piece. “The Last Epitaph”. This cosmic message is what can happen if we don’t lift our game and change the way we think. We must stop ‘The Habit of War’.

Allan did not keep his word to ‘God of Creation’ and after both broken legs had repaired, he went back to his adventurous wild ways, until March 1984, Third Day, Saturday 3 am.  And then he vowed to keep his word to God and began to learn how to write, by 2007 ‘Blue Light Cosmic Philosophy’ had evolved and ‘Philosophical Intelligence’ was identified, named and founded. Thus a new era of understanding was just beginning. By 2018 Allan kept his word and ‘Cosmic Law’ final edition on ‘Freedom of Speech’ and ‘Freedom of Choice’ was published.

What he wrote and published before and after became philosophical history.

It is not a coincidence that he married his third wife on 3rd March 1990 and that her three small diamond engagement ring was named three days. And true to the fairy tale they lived happily ever after. 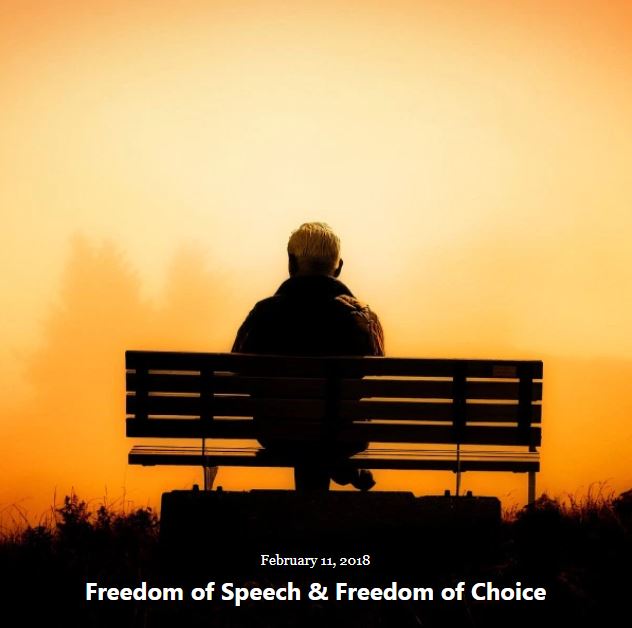 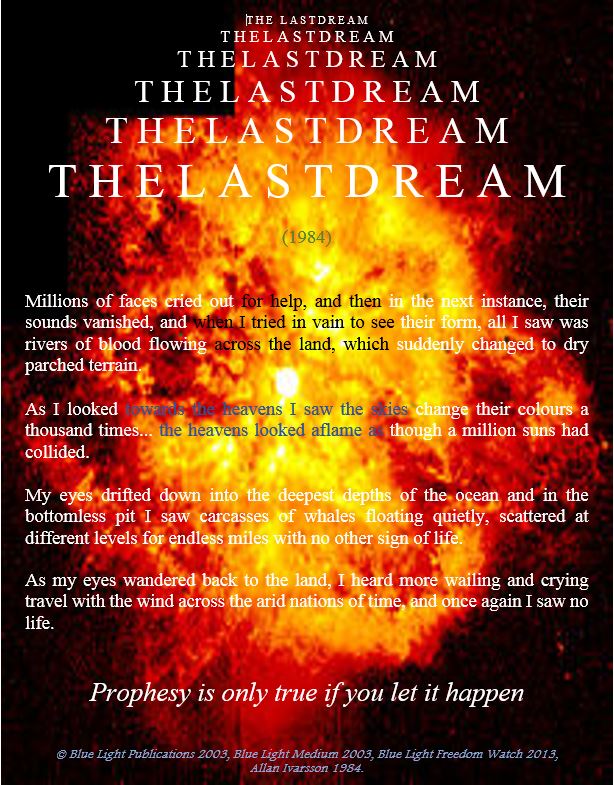